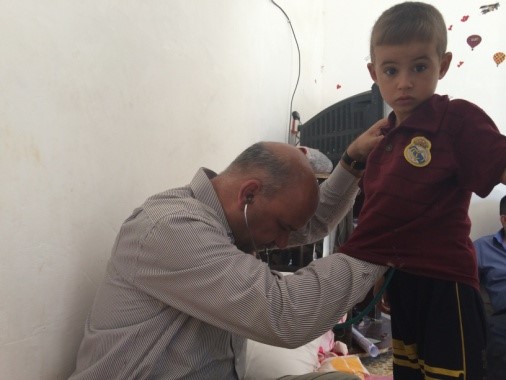 Last year, when the Islamic State (IS) forced hundreds of thousands to flee their homes in Iraq, one family left Nineveh Province for the comparative safety of Baghdad’s suburbs not knowing just how risky the journey was for their son, Ali Asghar Hussein.

It wasn’t until an AMAR medical team, led by our Regional Director, Dr Ali Muthanna, examined young Ali in August that they discovered he had a hole in his heart.

Following the discovery, the five-year-old was taken to the heart disease hospital in Baghdad’s Medical City, accompanied by the child’s father, Dr Ali and AMAR health volunteers Rewaq Fadel and Bassima Ibrahim.

The hospital was understandably overcrowded but they did manage to get Ali an appointment for an ultrasound examination. His parents were tole he would need surgery for his condition, but the date could not yet be determined due to the high number of people on the waiting list.

A further examination was carried out in November, and the date for the surgery was set for the beginning of 2015. Sadly, in January, when Ali arrived at the hospital with his worried parents, doctors said the operation couldn’t go ahead because of overcrowding.

The AMAR team again stepped in to help and decided to take Ali to a private clinic, as his condition was beginning to deteriorate. They took him to see heart specialist, Dr Oday. He explained that the medics they were dealing with at the hospital were the only ones who could conduct the surgery. It required equipment which was only available at the Medical City Hospital. Dr Oday promised to help bring the surgery forward and after making some phone calls managed to set the date for April 30th, 2015.

Finally, more than eight months after being diagnosed, Ali underwent surgery which was a complete success. Amazingly, he was allowed to leave the hospital just one day later. A date for review has been set for two month’s time.

Our medical team will continue to keep an expert eye on Ali from now on. The team is Dr Ali Muthanna,  Rewaq Fadel Abboud, Bassima Ibrahim, Anhar Faisal Hassoun, a health volunteer at AMAR, Dr Adel Ammar, Director of the Medical Department of AMAR and Massaad Amir, Manager of AMAR’s Baghdad office.