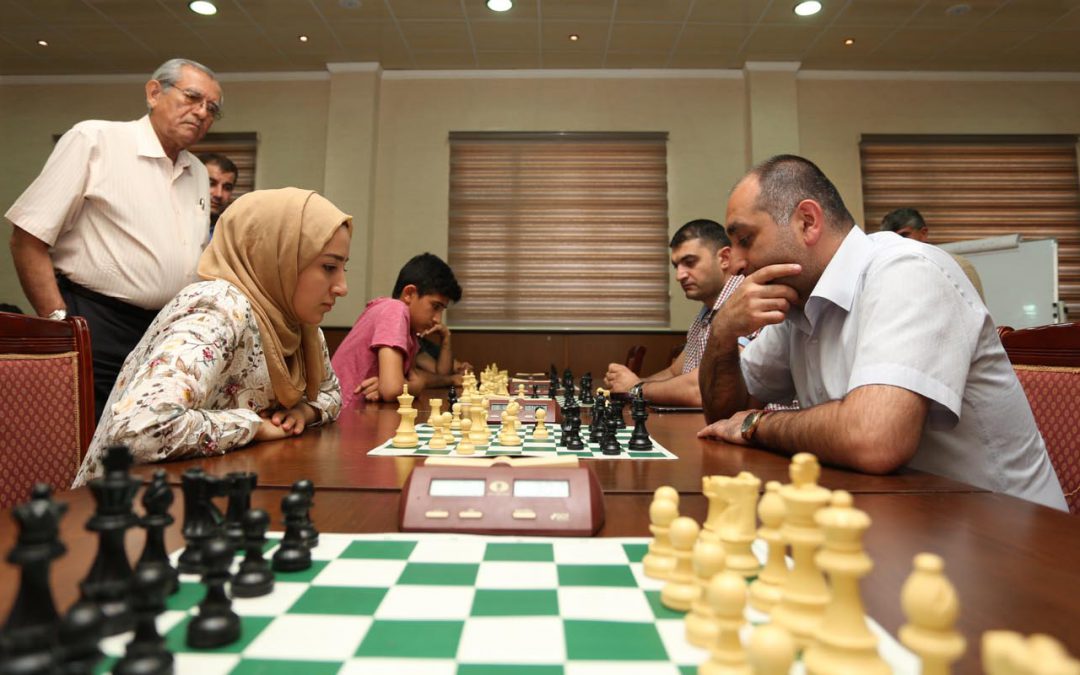 Two of the world’s leading chess players have travelled to Iraq to encourage refugees to play the game to help them overcome trauma and grief.

Azerbaijani Grand Masters, Farid Abbasov and Azar Mirzayev, flew into the war-torn country at the invitation of AMAR’s Chairman, Baroness Nicholson of Winterbourne. Travelling under the umbrella of the Heydar Aliyev Foundation, Abbasov and Mirzayev spent three days in several IDP camps near the Northern Iraqi city of Dohuk – less than 75 kilometres from the city of Mosul, still the scene of bloody battles between ISIS and allied forces.

The pair played multiple games against hundreds of keen men and women players.  The vast majority of the IDPs are severely traumatised by their experience and chess is being used as a way of helping them through their ordeals

Both Azerbaijani players are well-qualified to promote the game. Abbasov won 2nd place in the European Youth Chess Championship of 1997 and more recently won a gold medal in the 2007 international chess tournament in Sweden. In 2008 Azar Mirzayev ranked 2nd in a tournament in Spain and recently made the 3rd round of the Fajr Sabalan Cup in Iran.

“Chess is immensely popular in all the IDP camps,” explained Baroness Nicholson. “It allows the refugees to focus their minds on something other than the awful conditions they are living under. It also helps cultivate a sense of community and friendship amongst people who have been through the most dreadful and life-changing experiences.”

“I would like to thank the Heydar Aliyev Foundation, the Azerbaijani government and of course Mr Abbasov and Mr Mirzayev, for all their assistance and support. As we all know, Azerbaijan is now a leading chess-playing nation, and it is hugely encouraging that they were so keen to help the people of Iraq.”

A spokesman for the Heydar Aliyev Foundation, added: “Refugees are the most vulnerable layer of the population and suffer health and social problems. The mandate of our Foundation includes humanitarian activities to address these problems.”

“Baroness Emma Nicholson invited us to join this initiative aimed at supporting children and youth of this country and we were delighted to do so.”

AMAR, which is run almost entirely by Iraqi professionals and volunteers, now has plans to promote chess across the country.