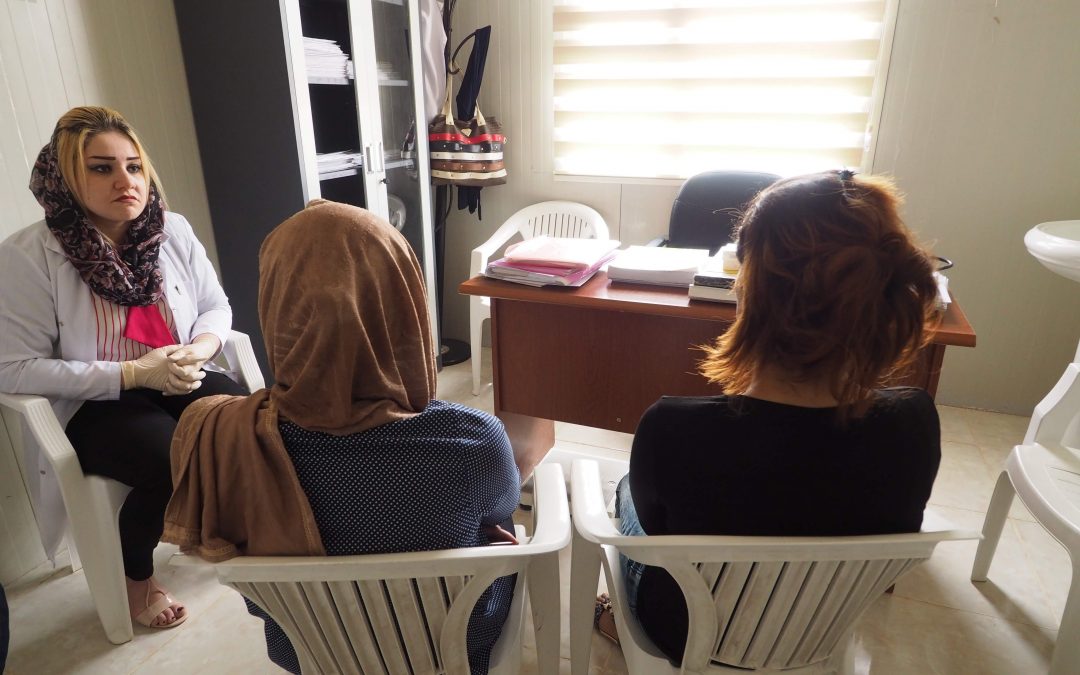 Yazidis displaced in the Kurdistan Region of Iraq are particularly vulnerable to COVID-19. They also face a mental health crisis that the pandemic threatens to make worse.

Zaid, 31, has just heard the news that a resident of Darashakran camp in Erbil has been diagnosed with COVID-19. The case, reported on April 27th, is the first in Iraq’s camps for refugees and internally displaced people (IDPs). Zaid lives in a camp north-west of Erbil with 22 members of his family. “People are terrified,” he says. “They are praying to god to protect them.”

In Iraq, 250,000 Yazidis are unable to return home to Sinjar almost six years after ISIS invaded the district and murdered, kidnapped and enslaved thousands of the religious minority, acts recognised by the UN as genocide. Most, like Zaid and his family, live in canvas shelters in large IDP camps.

Dr Nezar Ismet Taib is the Director General of Health in Duhok Governorate, which hosts 22 of the Kurdistan Region’s 38 camps. “People living in camps are among the most vulnerable groups to COVID-19,” he says. “They have big families living in very crowded shelters, poor sanitation, lack of awareness and many are working outside the camps. This makes it very difficult to protect them unless severe restrictions on movement are imposed.”

The AMAR Foundation runs healthcare clinics in two of the camps, Khanke and Essyan, each with a population of around 15,000. Teams are working hard to prevent an outbreak, making home visits and distributing leaflets and posters on the importance of hand washing and other protective measures.

A full lockdown in camps has been eased in recent days, but restrictions on movement are still in place. Initially, people could leave and re-enter camps only in an emergency, which restricted residents’ ability to earn. The authorities face an exceptionally difficult balancing act. For Zaid, though, the relaxing of restrictions has left him and his family feeling exposed.

Mental health crisis could get worse

When ISIS attacked Sinjar in 2014, they killed around 5,000 Yazidis and abducted 7,000 more, most of them women and girls who were forced into sexual slavery. Thousands of children were also kidnapped. Many remain missing.

No Yazidi has been untouched by this. Those who have returned from captivity have acute, complex mental health needs requiring long-term psychiatric and psychological care that stretched health authorities struggle to provide. Mental health care capacity in Iraq is exceptionally limited. According to a study by the Enabling Peace in Iraq Centre, in 2017 there were only 80 working psychologists for the whole of Iraq.

The provision of psychosocial support services, which attempt to make up some of these gaps, has already been affected by restrictions on movement imposed as a result of the virus. According to the International Organization for Migration, 45% of these are currently closed in Iraq.

Psychiatrist Dr Adnan Asaad Taher leads AMAR’s mental health programme in Essyan camp. He says that the team have had to scale back home visits, but psychotherapy sessions for the most severe cases continue.

“Residents of these camps have already witnessed large-scale trauma; the COVID-19 pandemic poses another potential trauma for many. With the spread of false information on social media, camp residents are faced with uncertainty,” Dr Adnan says. “They also face isolation and fear falling ill and losing loved ones to COVID-19.”

Dr Nezar, himself a qualified psychiatrist who treated the first Yazidi women and girls to escape from ISIS, is also concerned. “In our last mental health working group, many of our partners reported an increased number of suicides and other serious mental health problems among IDPs.”

He also believes that in the longer term “there will be a negative impact on general health and mental health services for victims of ISIS, especially ISIS victims of rape, who need more consistent and long-term mental health care.”

The diversion of healthcare resources to fight the virus and the impact the pandemic is having on the already struggling Iraqi economy are likely to limit the ability of the authorities to scale up mental health treatment. AMAR’s programme in Essyan will continue, but thousands more Yazidis need access to this kind of psychological support.

Displacement will last for many more years

Although some, like Zaid, dream of a return to Sinjar and the “simple, happy life” they had before ISIS, the region’s disputed status and the presence of various armed factions make it too unsafe and have hindered reconstruction efforts. With authorities now preoccupied with the pandemic and its economic consequences, the situation is unlikely to improve. For most Yazidis then there is little prospect of a life beyond the camps.

It is therefore vital that, as countries look to battle their own internal crises, the international community does not forget the Yazidi people recovering from genocide and facing this pandemic in ever more intractable displacement.