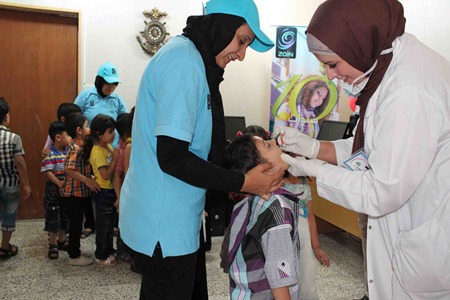 AMAR is helping the Ministry step up its vaccination campaign to prevent polio from spreading.

On March 30th, officials from the World Health Organisation confirmed a 6 year old boy in Baghdad had contracted the infectious disease, which had the same genetic fingerprint as a virus found in eastern Syria in October 2013.

Twenty-seven children were paralysed during the polio outbreak in Syria last year, and AMAR’s Women Health Volunteers (WHVs) and supervisors in Baghdad are working hard to increase awareness about the disease.

Working closely with Zain, our leading corporate partner, and the Ministry of Health, the WHVs have been campaigning across Baghdad in shops, schools and community centres to raise awareness of polio, how it is transmitted, which steps to take to prevent it spreading further and to urge members of the public to get vaccinations.

In 2013, AMAR delivered over 50,000 vaccinations in Iraq, but polio brings a renewed threat to vulnerable, unvaccinated people across the Middle East.

For those who have been previously unimmunised against polio, three doses of the vaccination are required.

The conflict across the Middle East has greatly disrupted this vaccination process.

For those fleeing from conflict, it’s hard to maintain a record of medical treatment, especially so for children and newborns who are most susceptible to the disease.

Alys Brown, Project Officer at AMAR, said: “This shows the continued need for AMAR’s WHV programme, especially in the situations of upheaval where polio thrives.

“AMAR’s WHVs are an important way of educating families about the vaccination process, and their links with the community mean they can provide personalised follow-ups to ensure that vaccinations are completed,” she added.

In April, major vaccination campaigns were launched in Iraq, Lebanon, Syria, Turkey and Egypt in the hopes of reaching over 20 million children in the coming months.

Polio is an acute, viral and infectious disease, which can attack the respiratory and circulatory system and affect motor ability in the legs, arms, and trunk muscles in the back.

For more information on thsi work, or any of our projects, please get in touch at london@amarfounation.org.