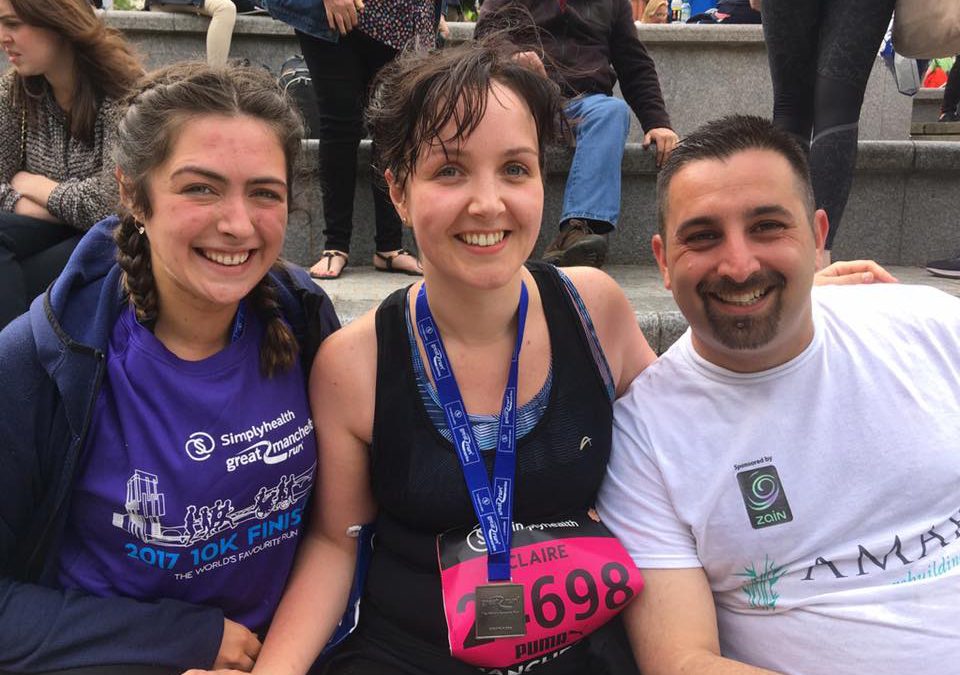 Like most competitors, Manchester’s Hussein Al-Alak has his own unique training routine for the Manchester 10k.

He begins with a cup of coffee in the morning, followed by a cigarette, prays for the best, tells himself it’s raining, then pulls on his trainers and gets out the door.

While not a serious athlete as such – “I like to walk, a fast walk,” he says – Hussein is deadly serious about helping make a difference in Iraq.

Although Manchester-born, Hussein’s family hails from Iraq, fleeing the country with the outbreak of war imminent under dictator Saddam Hussein.

“There was a window of two weeks for Dad to get my mum, who was pregnant with me, and my sisters out of Iraq,” the 38-year-old said.

Appreciative of a safe and peaceful childhood in Manchester, Hussein now wants to pay it forward, by taking part in his fourth Manchester 10k as part of the Simplyhealth Great Manchester Run on May 20.

It is the second year he has fundraised for the AMAR International Charitable Foundation.

“It’s the only charity in the United Kingdom that supports health, education and, more importantly, mental health programmes, in Iraq,” Hussein said.

“It takes me an hour to walk 10km and I enjoy walking it because you get to talk to other people and engage in the buzz.

“You’ve got a lot of amazing causes and it’s nice to be able to say: ‘This is what we’re doing at AMAR’.

“Because ultimately British people don’t know about Iraq and what’s happening over there. I like them to know that there is an alternative to war and violence.”

It’s a message that is particularly poignant for Manchester in the wake of last year’s Manchester Arena attacks on May 22.

Taking part in last year’s Simplyhealth Great Manchester Run in the aftermath of the tragedy, Hussein said the atmosphere was sombre.

“It was a very tense atmosphere – I felt like I was back in the Middle East,” he said.

“I remember because my friend Claire was nervous doing the Manchester 10k for the first time and she asked: ‘will it be safe?’

“And I said: ‘it will be perfectly safe – people experience things like this every day in Iraq’.

“If we allow our lives to be dictated by terrorists, we may as well not do anything.”

To donate to AMAR, Hussein is asking people to visit the website directly at www.amarfoundation.org

Photo caption: Supporter Orla Fitzsimons, pictured with Manchester 10k participants Claire Carrie of Edinburgh and Hussein Al-Alak of Manchester in May 2017. The pair used the opportunity to fundraise for British NGO AMAR.  Hussein will be taking part again on May 20.